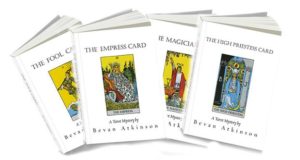 Welcome to The Tarot Mysteries!

I’ll be keeping these weekly blogs brief, and in this one I want to introduce you to the mystery series itself.

Right now you can read four books in the series: “The Fool Card,” “The Magician Card,” “The High Priestess Card,” and “The Empress Card.” They’re in both e-book and trade paperback formats, and are available either online or by order from your local bookstore. I’ve finished the draft of “The Emperor Card,” and it’s in the manuscript editing and publication stages, due for publication in July, 2017.

Check back here for news and updates from author Bevan Atkinson.