The Hermetic Order of the Golden Dawn

In the late 1800s a trio of British Rosicrucians/Masons formed a society devoted to occult studies. The three men, Woodman, Westcott and Mathers, named their secret society The Hermetic Order of the Golden Dawn. The influence of this society drove an ever-expanding interest throughout Western civilization in pursuing spiritual paths that were not aligned with […]

Inspiration strikes. Our mind focuses on how to accomplish this new and challenging goal that has besieged our consciousness and won’t let us ignore it. We marshal our resources and put into practice those techniques that we have learned over time will assist us in achieving our new objective. We take the first few steps, […]

The Fool Card is the great mystery of the Major Arcana. Its number is Zero, the all-encompassing circle, the whole, as well as the cipher. The Fool is a conundrum, a summary of opposites. He is the only Major Arcana card to survive into our modern playing cards, where he’s the Joker, and the Joker […]

The Queen of Swords Card

The 56 Minor Arcana in the 78-card tarot deck are the precursors of our modern playing cards. The four suits in the Tarot (Wands, Cups, Swords, and Pentacles) are now called Clubs, Hearts, Spades and Diamonds, respectively. There are four face cards in each suit of the Tarot, and in the modern playing deck one […]

This Saturday, July 15, at 11:00 p.m. PDT host Afrikahn Jamal Dayvs, the inspiration for the DeLeon Davies character in The Tarot Mysteries series, will interview Bevan Atkinson on his KPFA Radio B.A.J.A.B.A. on JaZzLine weekly show. If only because Afrikahn is indeed the world’s coolest human, stay up late and listen to some […] 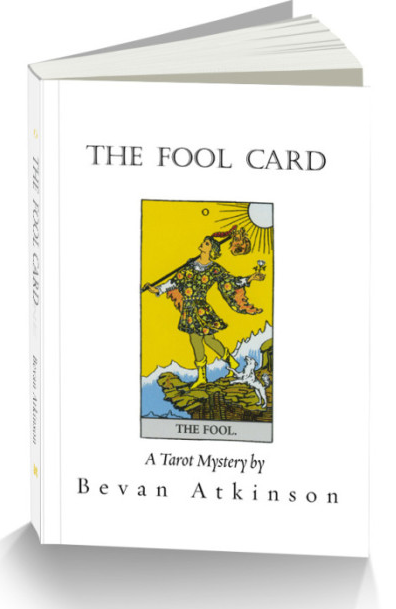 Here’s a sample from the first chapter of the first Tarot Mystery in the series. I lead a very quiet life, by intention. It is not yet a dotty old lady life, but I find eventfulness unpleasant. I was content. It was late at night, dark and foggy outside, and I had crushed lemon verbena […]

Welcome to The Tarot Mysteries! I’ll be keeping these weekly blogs brief, and in this one I want to introduce you to the mystery series itself. My goal is to do for the Tarot what Sue Grafton has done for the alphabet. In fact, it was her series that inspired mine. Because the Major Arcana of […]